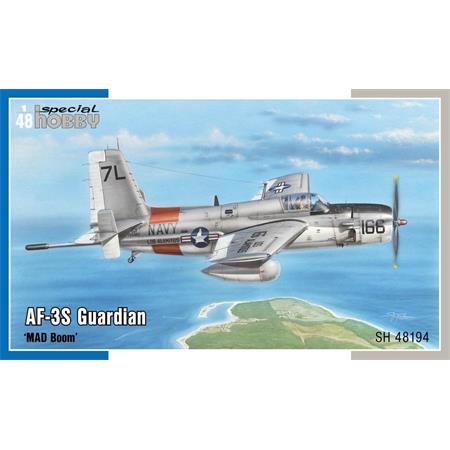 Log in and write a Review
Item Number:
SH48194
Manufacturer
Special Hobby
Scale:
1:48
42.40 €
VAT included plus shipping and handling
Unfortunately sold out at the moment
No new delivery date known, if necessary please activate stock alert
To the Notepad
Question regarding the Article
Plastic Kit with resin and PE parts
scale 1:48
unpainted/unbuilt

During the 1950s, the AF-2 Guardian anti-submarine aircraft were operating from the US Navy carriers in so-called Hunter-Killer pairs which consisted of one machine of the AF-2W version performing the Hunter role using its volumous, belly-mounted AP-20 search and early-warning radar to locate enemy’s submarines while the other member of the team was an AF-2S which was the Killer, carrying a variety of offensive anti-submarine weapons, such as torpedoes, depth charges or rockets in the bomb bay or beneath its wings.

The development of the Guardian began during WW2 although the original request from the US Navy had been for a torpedo-bomber. At Grumman, this project was known  under G-70 designation, while the Navy recognized it  as the XTB3F. This new type was to be propelled by a P&W R-2800 radial engine driving a four-bladed propeller in the nose and a Westinghouse 19XB jet engine mounted in the tail section. The Westinghouse jet was later removed from the specifications, yet before the prototype’s maiden flight, which took place on 19th December 1945. By this time the torpedo bomber role had already been outdated and the Navy asked for the type to be rebuilt into the two above mentioned versions.

The prototype AF-2 (which was the radar-equipped Hunter version) first flew in November 1948 while the AF-2S performed its first flight in January the following year. A year later, the type entered service with the US Navy, later to be joined by a third version, the AF-3S which was basically a AF-2S with a magnetic anomaly detector fitted. The AF-3s were operated both from land bases and aircraft carriers. During the Korea War, the type was used to defend US Navy vessels in the combat zone.

The Guardian was removed from front line service in 1955, remained just with US Naval Reserve units up to 1957. The type became the very first US Navy carrier-based aircraft to be specially built for anti-submarine warfare. It also holds the record for being the largest single-engined, piston-engined aircraft ever to be flown from the US Navy carriers.

Our model of the final, attack version of the Guardian consists of as many as eight styrene runners,

one clear sprue, a set of resin parts and a photo-ethed fret. The new AF-3S sprue contains also a new set of mainwheels with the correct number of slots in the hubs and an enlarged stbd wing pod housing more efficient radar to that used in the AF-2S version. The decal sheet caters for four machines, two of which were painted in blue overall per regulations issued later in the war. The VS-20 machine was operated in 1953, at first from NAS Atsugi in Japan, later from aircraft carrier USS Bagoeng Strait. The other blue Guardian belonged to VS-27 and flew from CVS-36 USS Antietam in the Mediterranean in 1953. AF-3Ss machines remained in service with reserve units long enough to receive the new Gray-White scheme, the other two Guardians in our kit offers this scheme as worn by NAS Los Alamitos based machines, the scheme is also accompanied by orange fuselage bands which were used to mark training machines. 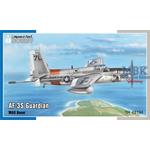