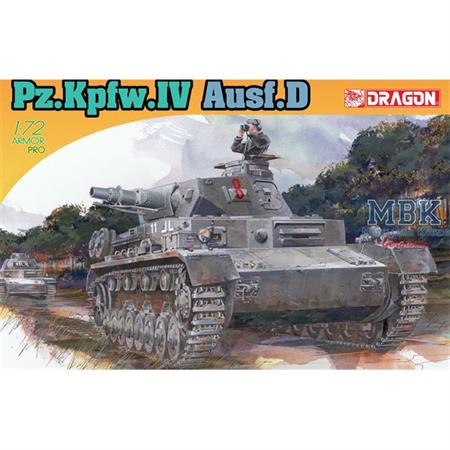 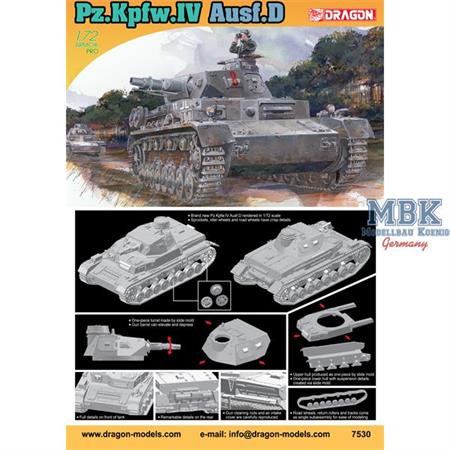 16.95 €
VAT included plus shipping and handling
Unfortunately sold out at the moment
No new delivery date known, if necessary please activate stock alert
To the Notepad
Question regarding the Article
Plastic Model Kit for a tank
- Scale 1:72
- not built/painted

Dragon has a brand new Panzer IV Ausf.D tank in 1/72 scale available for modelers wishing to expand their number of variants in this family. The Ausf.D was produced from October 1939 through to May 1941, with just 229 units manufactured in total. This type reintroduced a hull machine gun and it used an external mantlet (instead of an internal one). Armor protection was also improved, with 20mm armor now used on the sides. The tank retained the previously used short-barreled and low-velocity 7.5cm KwK.37 L/24 gun as its main armament.

Dragon has previously released 1/72 scale plastic kits of the Panzer IV family, but this is the very first of the Ausf.D. Thus, it’s a 100% newly tooled kit. By judiciously combining smart engineering and slide-mold technology, the number of parts to assemble has been reduced to a minimum. For example, the road wheels and track run are made as one piece. Indeed, these parts only need to be plugged into the hull suspension units and glued and, hey presto, they’re finished! This is a completely new idea from Dragon to ease assembly in every possible way without sacrificing one iota of detail. Indeed, modelers will be able to enjoy their craft more than ever without wasting time on repetitive tasks. The Panzer Ausf.D was an early member of the family, but Dragon has applied the latest technology to it!
Customer Reviews 6
Log in and write a Review
2 Reviews 1 Reviews 1 Reviews 2 Reviews 0 Reviews 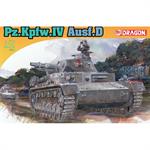