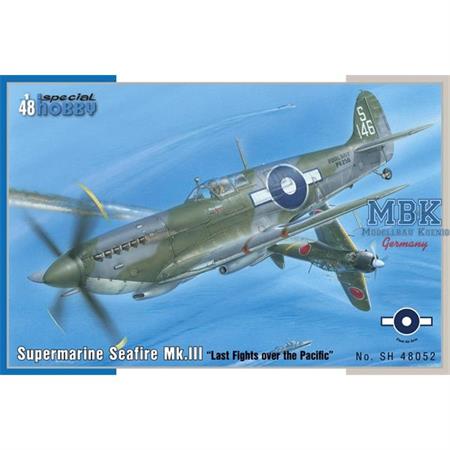 Log in and write a Review
Item Number:
SH48052
Manufacturer
Special Hobby
Scale:
1:48
23.95 €
VAT included plus shipping and handling
Unfortunately sold out at the moment
No new delivery date known, if necessary please activate stock alert
To the Notepad
Question regarding the Article
Platic kit
scale 1/48
not build/painted

The Seafire naval fighter aircraft came into existence during WW2 as a mere stopgap measure based on a standard Mk.V Spitfire airframe adapted by adding naval equipment. Three versions were produced, which were fitted with a RR Merlin engine, which were the Mk.I to Mk.III, followed later by Griffon-equipped Seafires Mk.15, 17, 45, 46 and 47 (Special Hobby offers the Mk.15 version under cat.nos. SH48116 and 48125). The Seafire Mk.III was unlike its predecessors, equipped also with a folding wing. A low-altitude tuned Merlin 45 engine made the plane much faster at sea level than the then current land-based Spitfire Mk.XII was. Eventually, the Mk.III Seafire version turned out to be the best WW2 naval fighter of British origin. During its service on aircraft carriers, the Seafire´s delicate and fragile undercarriage was a drawback, but once aloft, the fighter became a formidable enemy, which may have been witnessed even by Japanese pilots in the final stages of the war.

The SH48052 kit brings you the chance to build one of three Seafires that operated from aircraft carriers in the Pacific, one of which was flown by Sub/Lt R.H. Reynolds, a pilot with the highest score achieved in a Seafire. The other machine took part of the very last combat of WW2 that British naval fighter pilots fought in. On the morning of August 15, 1945. Sub/Lt G.J.Murphy shot down two Zero fighters in this engagement. The kit comes on five sprues of grey styrene, one clear sprue of canopy parts, photo-etched parts and a set of self-adhesive masks. 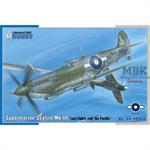