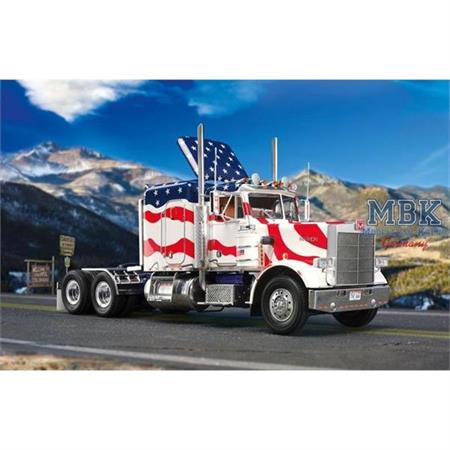 53.95 €
VAT included plus shipping and handling
Unfortunately sold out at the moment
No new delivery date known, if necessary please activate stock alert
To the Notepad
Question regarding the Article
plastic kit
scale 1:25

The Marmon Motor Company is based in Denton, Texas. It has been in existence since 1963 and has acquired an excellent reputation amongst American truck manufacturers with its exquisite range of vehicles. Since their trucks were handmade, production numbers where correspondingly low, but they stood out amongst others due to their extraordinary and exquisite quality. Its customers were recruited from truckers who owned and drove their own trucks and looked after their vehicles with associated pride. The last Marmon was constructed in 1997. Marmon were amongst the most popular trucks in America at that period in time. Even today these rare Kings of the Road are highly sought after vehicles.
The trademark Peterbilt was also amongst the custom built trucks that Marmon built and fitted out according to customer requirements. This model kit is based on the Peterbilt 359 that Marmon fitted with a new bonnet and other individual accessories. The Conventional is powered by a Cummins NTC 290 engine that with its 6-cylinders and 14 litre capacity achieves 290 bhp at 2000 rev / min. The power is transmitted via a Fuller RTO 9513 gearbox to the Rockwell double axes. The cabin of the original was made partly from aluminium and partly out of fibre-glass. 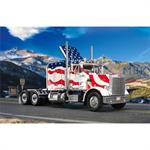