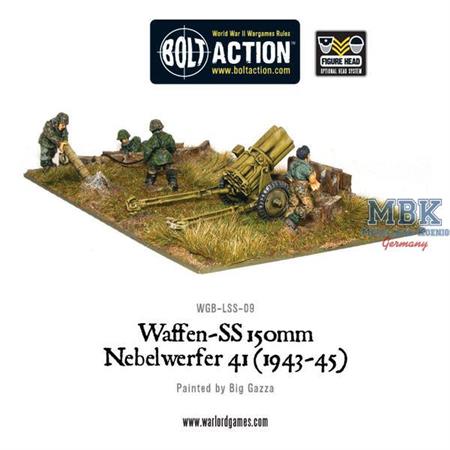 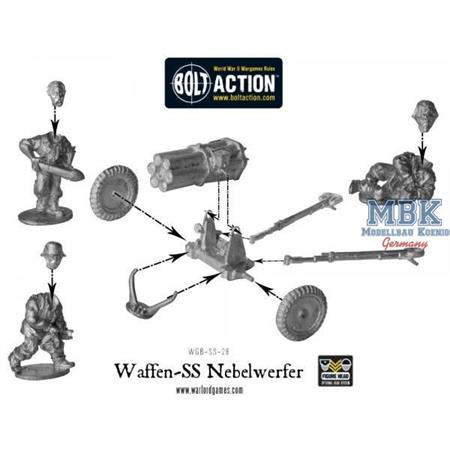 Log in and write a Review
Item Number:
BA-WGB-LSS-09 (351)
Manufacturer
Bolt Action
Scale:
1:56
15.50 €
VAT included plus shipping and handling
Unfortunately sold out at the moment
No new delivery date known, if necessary please activate stock alert
To the Notepad
Question regarding the Article
German scientists had been working on rocketry for all manner of purposes in the years leading up to the war. When the Germans crashed over the border into Russia in 1942 they had a secret weapon, with the cover name of Nebelwerfer or "Fog thrower". This was a multi-barreled, electrically-fired rocket launcher that sent its payload of heavy rockets thousands of yards out to engulf enemy positions...
With a fearsome  flash of flame and the howling of a banshee wail they caused terror when used in large numbers; bringing down a barrage on an area less accurately than artillery but with awesome psychological effect that could sap the will of a defender.
This SS Nebelwerfer team are shown readying their weapon; one paying out more cable, one fetching up new rockets and the third eager to press the fire trigger, fire each barrel and then move out to a new fire position before the fiery trails betray their position.
This set features the Warlord Games Figure Head System.  This allows you to choose which heads to attach to your models allowing amazing variety and poseability.

This set contains a metal Nebelwerfer with four SS Crewmen. 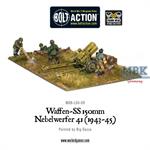