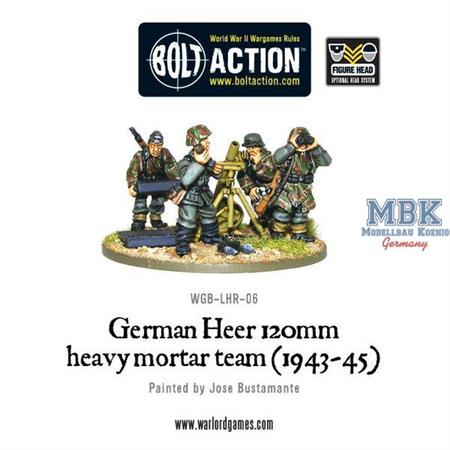 Log in and write a Review
Item Number:
BA-WGB-LHR-06 (360)
Manufacturer
Bolt Action
Scale:
1:56
11.50 €
VAT included plus shipping and handling
Unfortunately sold out at the moment
No new delivery date known, if necessary please activate stock alert
To the Notepad
Question regarding the Article
Developed in 1941, the 12 cm (about 4.7 in) GrW 42 was an attempt to give German infantry units a close support weapon with a heavier performance than the mortars used in general service at the time. The weapon was a copy of the mortar used by Soviet forces on the Eastern Front. The Soviet version that was copied, the PM 38 120 mm mortar, was used by German soldiers after capturing one of them. These Soviet versions were defined 12 cm Granatwerfer 378 (r).

The GrW 42 was basically the usual three part construction made up of a circular base plate like the Soviet weapon, the tube itself and the supporting bipod. Because of the greater weight of the weapon (280 kilograms or 620 pounds) a two wheeled axle was utilised, enabling the mortar to be towed into action. The axle could then be quickly removed before firing. 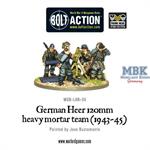