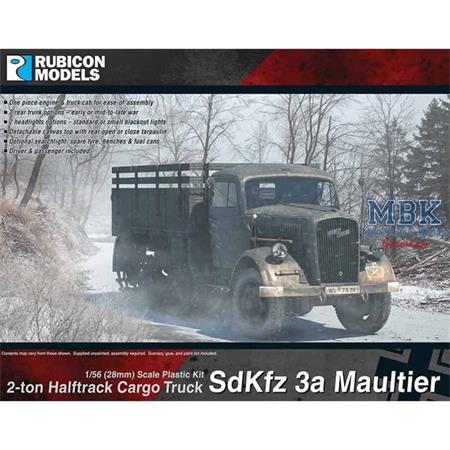 Log in and write a Review
Item Number:
RM280046
Manufacturer
Rubicon Models
Scale:
1:56
21.95 €
VAT included plus shipping and handling
Unfortunately sold out at the moment
No new delivery date known, if necessary please activate stock alert
To the Notepad
Question regarding the Article
When the Germans ran into the spring thaw on the Eastern Front they desperately needed more mobile vehicles to provide men and materiel to forward units.  One solution was to take reliable wheeled vehicles and modify them to use a tracked drive system.

The SdKfz 3 Maultier (“Mule”) is the name given to series of half-track trucks used by Germans during WW2.  They were based on Opel, Mercedes-Benz, Alfa-Romeo or Ford trucks.  One of the best known of these conversions was the SdKfz 3a Maultier based on the 3-ton variant of the Opel Blitz cargo truck.

During the beginning of 1941 German troops discovered that their wheeled transport vehicles were unsuitable for the muddy rasputitsa conditions at the beginning of the invasion of Russia.  Only halftracks were able to operate in these conditions, but removing them from their combat role for supply duties was not feasible, so it was decided to produce half-tracked versions of standard Opel, Daimler-Benz, Alfa-Romeo and Ford trucks (lorries) by removing their rear axles, truncating the prop shafts and connecting them to redundant Panzer I track assemblies.  Heavier trucks (4 tons payload) were fitted with Panzer II track assemblies.

Most Maultier conversions were based on Opel Blitz model S trucks, which proved successful in service.  While lacking the overall mobility of purpose-built halftracks they were cheaper and sufficiently effective.  From 1943, some Maultier trucks were fitted with armored bodies, designated SdKfz 4.   Some of these were armed with 10 tubed rocket launcher Panzerwerfer 42, and were designated SdKfz 4/1. 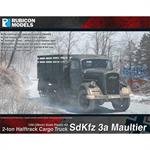