Log in and write a Review
Item Number:
RM280011
Manufacturer
Rubicon Models
Scale:
1:56
21.95 €
VAT included plus shipping and handling
Unfortunately sold out at the moment
No new delivery date known, if necessary please activate stock alert
To the Notepad
Question regarding the Article
Panzer III (designated as Sd.Kfz. 141) was the common name of a medium tank that was developed in the 1930s by Germany and was used extensively in World War II.

The Panzer III was intended to fight other armoured fighting vehicles and serve alongside the infantry-supporting Panzer IV; however, as the Germans faced the formidable T-34, stronger anti-tank guns were needed.  Since the Panzer IV had a bigger turret ring, the role was reversed.  The Panzer IV mounted the long barreled 7.5 cm KwK 40 gun and engaged in tank-to-tank battles.  The Panzer III became obsolete in this role and for most purposes was supplanted by the Panzer IV.  From 1942, the last version of Panzer III mounted the 7.5 cm KwK 37 L/24, better suited for infantry support.  Production of the Panzer III ended in 1943 with a total of around 6,000 being manufactured.
With this model kit, you can assemble the Panzer III into an Ausf J, M, or N variant.  It also comes with 2 gun choices with detachable turret and side armour skirts (Schürzen) 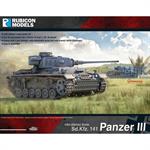