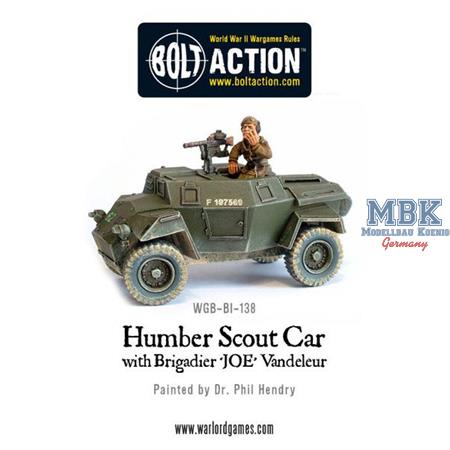 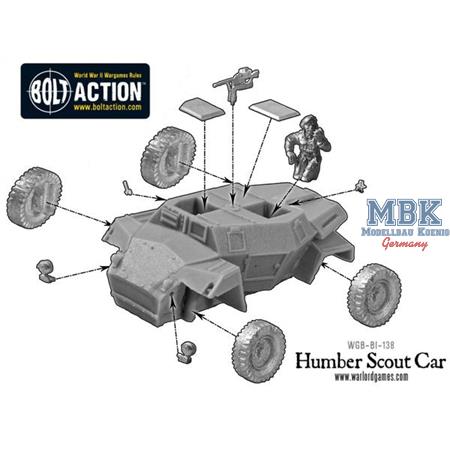 Einloggen und Bewertung schreiben
Item Number:
BA-WGB-BI-138 (86)
Manufacturer
Bolt Action
Scale:
1:56
17.50 €
VAT included plus shipping and handling
Unfortunately sold out at the moment
No new delivery date known, if necessary please activate stock alert
To the Notepad
Question regarding the Article
The Humber Scout Car carried a crew of two, with an emergency seat for a third member. It was equipped with a No. 19 radio set and armed with either a Vickers K machine gun or a drumfed Bren gun. This was mounted above the roof, and could be operated from inside the vehicle using a system looking similar to bicycle handlebars, where the "brake" levers fired the triggers of the MGs.

Production of the vehicles continued until 1945 with over 4,000 vehicles delivered - 1,698 of them Mk I version. They were used by British armoured units (e.g. the 11th Armoured Division and the Guards Armoured Division) for scouting/liaison.

A number of Humber Scout Cars were given to the Polish II Corps and the 1st Czechoslovak Armoured Brigade. After the war, the vehicle was used by some European armies, with the Belgian police using it until 1958. 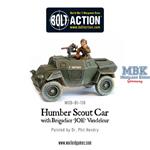