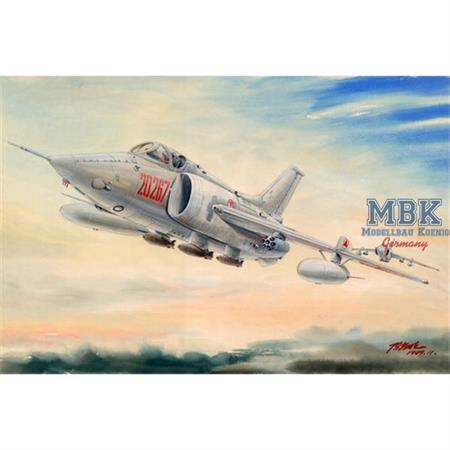 19.60 €
VAT included plus shipping and handling
Unfortunately sold out at the moment
No new delivery date known, if necessary please activate stock alert
To the Notepad
Question regarding the Article
Plastic Model Kit for a plane
- Scale 1:72
- not built/painted
- paint and glue not included

Q-5 is derived from China’s F-6 (J-6)/MiG-19 and entered mass production in 1969. The initial design and development began in the early 1960’s.
As originally designed the Q-5 used two 30mm cannon installed in the nose on both sides, later changed to two 23mm cannon in the wings. The lengthened fuselage incorporates an internal weapons bay some 4m in length. Additional ordnance can be carried on external pylons under each wing. Later variant was adapted to carry nuclear armament.
Q-5 has been continuously improved and upgraded, eventually becoming a huge family of single-seat and two seater types including Q-5, Q-5I, Q-5IA(Q-5B), Q-5II(Q-5C), Q-5III, Q-5D, Q-5E, Q-5F, Q-5G, Q -5J, Q-5N.

Production of Q-5 series exceeded more than one thousand aircraft. In addition to Chinese air & naval deployment, Q-5 has been exported to North Korea, Pakistan and other countries known locally as the Q-5. 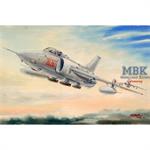