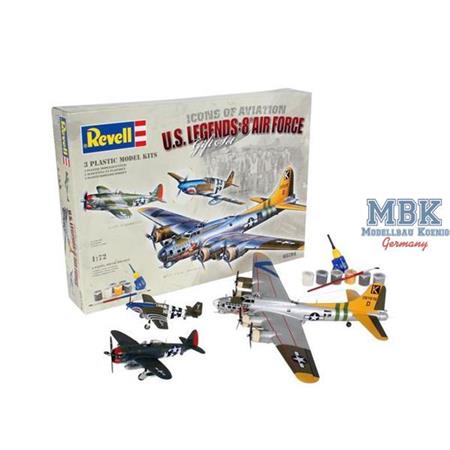 36.50 €
VAT included plus shipping and handling
Unfortunately sold out at the moment
No new delivery date known, if necessary please activate stock alert
To the Notepad
Question regarding the Article
Plastic Model Kit for three aircrafts.

The U.S. 8th Air Force was stationed in South East England from early in 1942 under the command of Major General Carl A. Spaatz. Whilst preparing for the Allied invasion of Western Europe it expanded to become the largest air force in the history of aviation. From the middle of 1944, the Eighth Air Force was able to deploy more than 2,000 four-engined bombers and 1,000 fighter aircraft for missions against multiple targets. With its strategic daylight raids against German industry and lines of communication as well as enemy airfields and troop positions it made an important contribution to the achievement and sustainment of air superiority and for the Allied victory in Europe. 6866 bombers and 3695 fighter aircraft were lost by the end of the War. In the Summer of 1944 the 8th Air Force had around 1800 Boeing B-17 Flying Fortress under its command. Their maximum bomb-load was 5.8 tons. From the end of 1943, its 15 Fighter Groups gradually converted to the long range P-51B escort fighter armed with six heavy machine-guns. For the first time its bomber formations now received effective protection. From May 1944 the P-47D equipped with eight 12.7 mm MG's proved its worth not only as an escort fighter but especially as a fighter bomber. 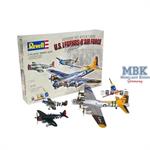