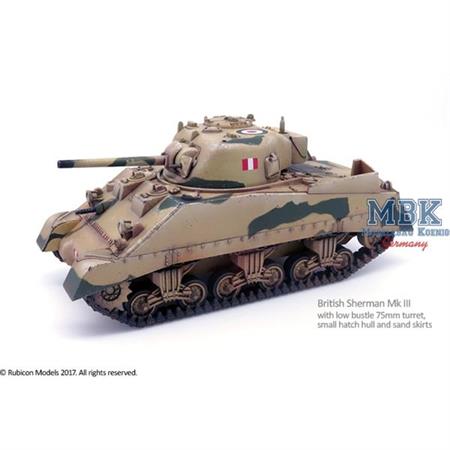 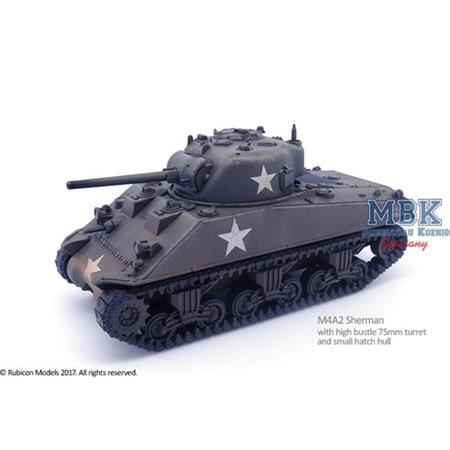 Log in and write a Review
Item Number:
RM280055
Manufacturer
Rubicon Models
Scale:
1:56
23.95 €
VAT included plus shipping and handling
1 Pieces available
Shipping 1 - 2 days
To the Notepad
Question regarding the Article
The M4A2 Sherman used a welded hull nearly identical to the M4, but with a pair of vented armoured grates on the rear hull deck. The M4A2 tanks used the GM6046 twin diesel. This version was produced with all the improvements the other M4 variants got, like the large hatch hull. The M4A2 would see very limited combat in US hands, most being the British, with some 75 tanks going to the Russians and USMC. This was the preferred version for Soviet Lend-Lease deliveries, since the USSR was using all diesel tanks. It was produced in six factories with 10,968 of all turret types produced from April 42 to July 45.

The Marines operated a lot of small hatch and a fairly large number of large hatch M4A2 tanks, until the supply of 75mm armed versions dried up in late 1944. Then they switched over to large hatch M4A3(75)W tanks, but there were some M4A2 holdouts amongst the six battalions.

M4A2s used by the Red Army was considered to be much less prone to blow up due to ammunition detonation than the T-34/76, but tended to overturn in road collisions because of their much higher centre of gravity. Under Lend-Lease, 4,102 M4A2 medium tanks were sent to the USSR. Of these, 2,007 were equipped with the 75mm gun, and 2,095 carried the 76mm gun. The total number of Sherman tanks sent to the USSR under Lend-Lease represented 18.6% of all Lend-Lease Shermans. The first 76mm-armed Shermans started to arrive in the Soviet Union in late summer of 1944. In 1945, some units were standardized to depend mostly on them, and not on the ubiquitous T-34: 1st Guards Mechanized Corps, 3rd Guards Mechanized Corps, and 9th Guards Mechanized Corps.

Other countries that used the M4A2 Sherman included Britain, New Zealand, Poland, and the Free French Forces. No US Army combat use of the M4A2 except for the USMC and DD conversions for the Omaha landings. 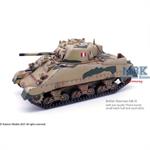