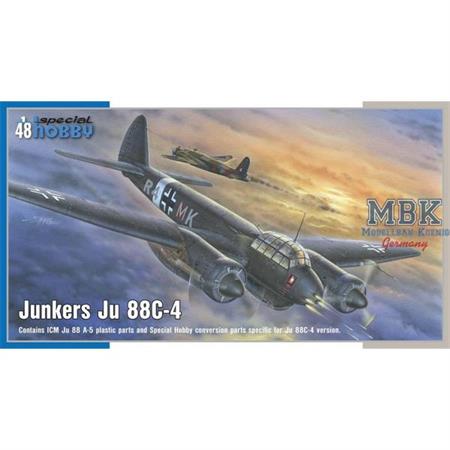 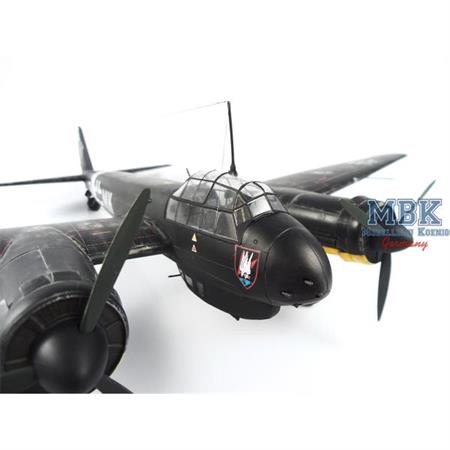 In the years before the outbreak of WW2, the German Luftwaffe introduced into service two categories of fighter planes. Besides the single-engined fighter types such as the Messerschmitt Bf 109s, there were also twin-engined, heavily armed fighters of the Zerstörer (destroyer in English) category put into the service. The most well known Zerstörer type of the pre-war era was the Messerschmitt Bf 110. During 1940, it became clear that the type could not cope successfully with some of its assigned tasks due a lack of speed. At that time, the Luftwaffe´s main high-speed bomber (schnellbomber) was the Junkers Ju 88, and its performance was such that it was clear that it could be easily converted into a heavy fighter too. The Junkers designers were well aware of the fact, and as early as 1938 they carried out a series of flight tests using the V-7 prototype with lower overall weight, and armed with one 20mm cannon and three 7.9mm machine guns. Following the successful tests production was commenced, by converting 20 Ju 88A-1 machines to Ju 88C-2 fighter specification. These airframes were fitted with shorter-span wings, a cannon and three MGs. The same type of armament was used also with the later fighter version designated as the Ju 88C-4, which was built from the specification of the Ju 88A-5 bomber variant and featured a standard span wing with earlier Jumo 211F or G powerplants.

The machines had various styles of the canopy, and some of them were produced with heavier armament of two cannon in an under-fuselage gondola. The production run ended with a total of 120 C-4 airframes. The first Ju 88C-2 and C-4 machines were put on strength of newly-established night fighter units NJG-1 and NJG-2 and were used mainly in the night intruder role over the British Isles and in the Mediterranean. The machines did very well in difficult night fighting conditions, achieving several victories, mostly over enemy territory with their only means of finding the enemy their eyesight. It was only the later Ju 88C-6 version that was equipped with radar, and this version replaced the earlier dash two and dash four variants.

The Ju 88C-4 is just the version which we have chosen to model to enrich our production range. The basis for our model is the new ICM kit which depicts the A-5 bomber version and the original sprues are accompanied by a new sprue with grey styrene nose section parts and additional armament. We have also tooled a new set of clear parts, detailed resin items and a large decal sheet that brings the modeller a choice of three rather attractive machines. The sheet is printed in superb quality by Italian company Cartograf, and has marking options for two all-black aircraft and one wearing a camouflage scheme. The model will be release as a limited edition only. 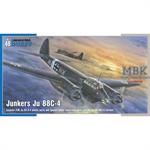