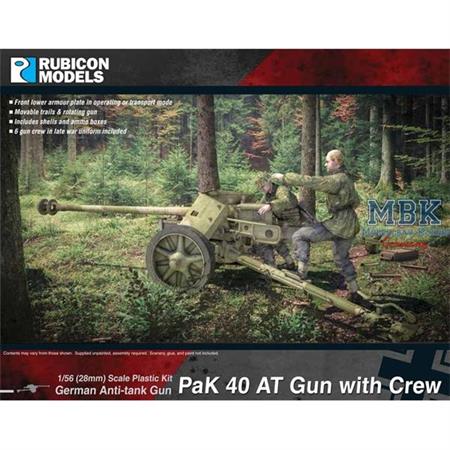 Log in and write a Review
Item Number:
RM280059
Manufacturer
Rubicon Models
Scale:
1:56
17.95 €
VAT included plus shipping and handling
Unfortunately sold out at the moment
No new delivery date known, if necessary please activate stock alert
To the Notepad
Question regarding the Article
The 7.5cm PaK 40 (7,5cm Panzerabwehrkanone 40) was a German 7.5cm anti-tank gun developed in 1939 to 1941 by Rheinmetall and used during WW2. The PaK 40 formed the backbone of German anti-tank guns for the latter part of the war, mostly in towed form, but also on a number of tank destroyers such as the Marder series. Approximately 20,000 PaK 40s were produced between 1942 and 1945.

Development of the PaK 40 began after reports of new Soviet tank designs began to reach Berlin in 1939. The 5cm PaK 38 was still in testing at this point, but it appeared it would not be powerful enough to deal with these newer designs. Contracts were placed with Krupp and Rheinmetall to develop what was essentially a 7.5cm version of the PaK 38. However, while the PaK 38 made extensive use of light alloys to reduce overall gun weight, these were now earmarked for Luftwaffe. As a result, the PaK 40 used steel throughout its construction and was proportionally heavier than the 5cm model. To simplify production, the PaK 38’s curved gun shield was replaced by one using three flat plates.

The project was initially given low priority, but following the invasion of the USSR in 1941 and the appearance of heavily armoured Soviet tanks such as the T-34 and KV-1, it was given an increased priority. The first pre-production guns were delivered in November 1941. In April 1942, the Wehrmacht had 44 guns in service; by 1943, the PaK 40 formed the bulk of German anti-tank artillery.

The weapon was effective against almost every Allied tank until the end of the war. The Pak 40 was much heavier than the Pak 38; its decreased mobility meant that it was difficult or even impossible to move without an artillery tractor on boggy ground.  After the war, the Pak 40 remained in service in several European armies, including Albania, Bulgaria, Czechoslovakia, Finland, Norway, Hungary and Romania. 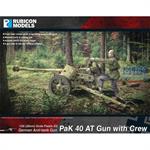