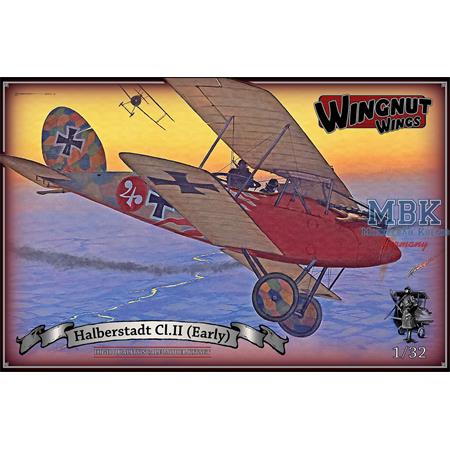 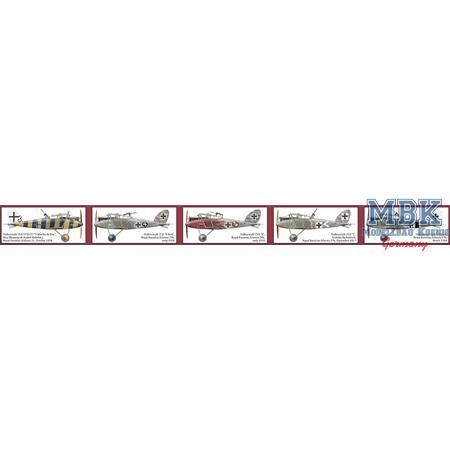 155.00 €
VAT included plus shipping and handling
Unfortunately sold out at the moment
No new delivery date known, if necessary please activate stock alert
To the Notepad
Question regarding the Article
Highly detailed plastic Model kit with PE parts to build a plane
Scale 1:32
not built/painted


The Halberstadt Cl.II was a highly successful escort fighter and infantry support aircraft. Halberstadter Flugzeugwerke GmbH was initially established in 1912 as Deutsche Bristol Werke GmbH and built Bristol aircraft under license. After war broke out in August 1914 they changed their name to Halberstadter Flugzeugwerke GmbH and continued to build aircraft more suited to training until late 1915 when they introduced their successful Halberstadt D.1 single seat fighter. In November 1916 Halberstadt started work on 3 prototypes built to Idflieg’s new lightweight C class (C = armed two-seat) specifications incorporating many features from their single seat fighters. The result was the sleek 160hp Daimler-Mercedes D.III powered Halberstadt Cl.II, the lower case “l” indicating leicht (light) weight, and the first prototype 9902/16 was completed in April 1917. After initial evaluation the single piece top wing was split into 3 parts, the fully enclosed engine cowling was reduced and the elevator balances were removed. Following successful type-testing in May 1917, an order was placed for 100 Halberstadt Cl.II and production aircraft began arriving at front line units from late July 1917 onwards. It was very well regarded for its good visibility, climb rate, maneuverability, stability and ease of internal communication afforded by the close nature of the pilot and gunner. Halberstadt Cl.II were initially tasked with escorting traditional two-seat C type reconnaissance and artillery spotting aircraft, often assigned to a specialised Schutzstaffel (Protection Squadron) which were renamed Schlachtstaffel (Battle Squadron) following their transition to infantry support in March 1918.

The Halberstadt Cl.II featured a plywood skinned top wing centre section and fuselage with conventional linen covered tailplane and wings, although the wing fabric was applied at a 45 degree angle to the line of flight. Early production Halberstadt Cl.II had a forward firing LMG 08/15 “Spandau” mounted to the port side of the engine, aerodynamic control rods for the ailerons and an undersize rudder, which was enlarged shortly after production began and retrofitted to earlier aircraft. On late production Cl.II the LMG 08/15 “Spandau” was mounted above the starboard side of the engine and the aileron control rods were simplified. Some very late production aircraft were fitted with a redesigned gun ring with “X” style bracing which was also seen on the Halberstadt Cl.IV. It appears to have been the intention to arm late production aircraft with a 2nd forward firing “Spandau” mounted high on the port side but only a very small number were finished this way. Early and late production aircraft could be found powered by 160hp, 180hp and 200hp Daimler-Mercedes D.III, D.IIIa and D.IIIaü engines. The bottom of the fuselage under the cockpits was constructed from metal to provide some protection from ground fire. Depending on operational requirements the Halberstadt Cl.II could carry various models of camera and wireless equipment as well as small bombs. About 900 Halberstadt Cl.II were produced, 200 of which were built by Bayerische Flugzeug Werke (BFW) under license in 1918, half of which were powered by the 180hp Argus As.IIIa engine and designated the Cl.IIa. Although superseded by the even lighter Halberstadt Cl.IV introduced in the middle of 1918, the Cl.II soldiered on to the Armistice and saw post war service with Poland. Any history of this important aircraft here is of necessity very brief, therefore we encourage you to seek out the references mentioned below for a more thorough understanding of this important aircraft.


WW1 colour schemes are contentious at the best of times and while we have been as meticulous as we could be to provide what we consider to be accurate painting information for this model, I’m sure some will not find our choices to their liking. Early production Cl.II appear to have been finished in a similar fashion to that seen on DFW C.V built by Halberstadt under license from mid 1917. The upper surfaces of the fuselage (and top wing centre section) were camouflaged in a distinctive multicolour stippled finish in a patchwork design which became less distinctive as production continued. The patchwork camouflage on the fuselage was described in the capture report for late production Halberstadt Cl.II 15342/17 as “...colours arranged in indefinite areas and shading into one another. The colours used are a cloudy yellow, dark and light green, brown, purple and a light blue” which appear to have wrapped around to the undersides on many later production aircraft. The only known contemporary reference specifically mentioning the fuselage bottom colour is for 15342/17 which was described as “...coloured yellow throughout” and would appear to have been finished this way at the unit for identification purposes. The fuselage wreckage of very late production Cl.II 1231/18 and a 2nd unidentified Cl.II were described simply as “camouflaged … green and brown” which indicates they were probably painted in a similar fashion to the dark brown and dark green stipple finish found on several surviving Halberstadt Cl.IV fragments.  Some very early production aircraft had their wings and tailplane upper surfaces finished with light 5 colour lozenge (intended for use on the bottom) with plain bleached (white) linen undersides and had the bottom of the fuselage (and underside of the top wing centre section) painted white to match. But most aircraft had the upper surfaces of the wings and tailplane covered with the more appropriate dark 5 colour upper lozenge fabric and the light 5 colour lozenge used on the undersides as intended. Some very late production Cl.II utilized 4 colour lozenge fabric. Additionally many colourful unit and personal markings were applied, all of which remain amongst the liveliest of topics for modellers to debate.
Customer Reviews 5
Log in and write a Review
4 Reviews 1 Reviews 0 Reviews 0 Reviews 0 Reviews 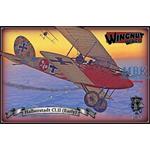