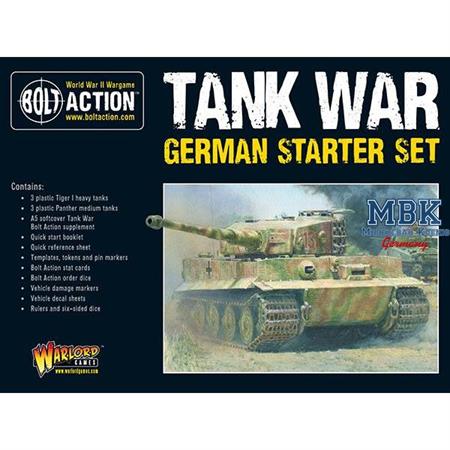 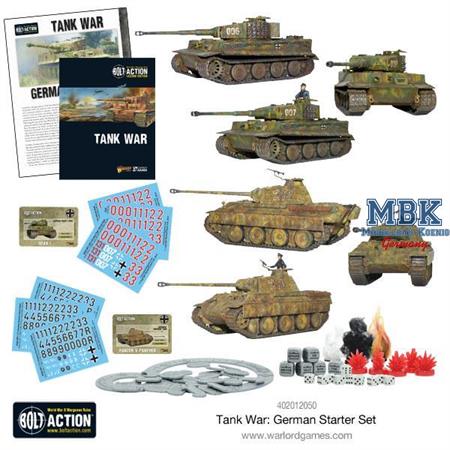 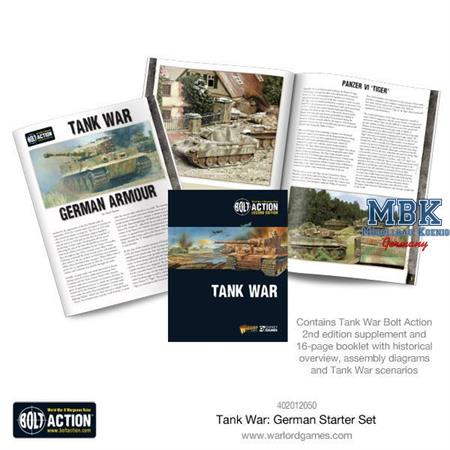 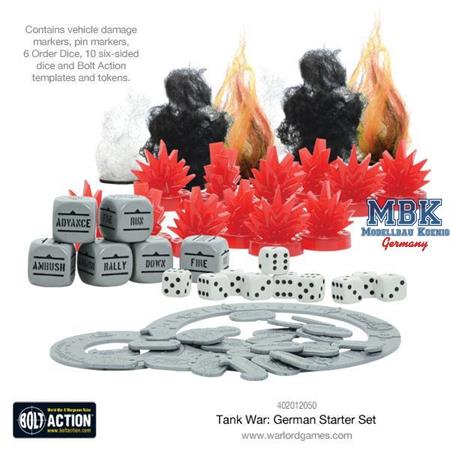 Log in and write a Review
Item Number:
BA-402012050
Manufacturer
Bolt Action
Scale:
1:56
94.95 €
VAT included plus shipping and handling
Unfortunately sold out at the moment
No new delivery date known, if necessary please activate stock alert
To the Notepad
Question regarding the Article
Limited steel resources forced Germany's hand to create monstrous tanks, vehicles capable of taking on whole squadrons on their own and coming out on top. Spearheading this assault is the Panther, boasting tough front armour, making it the ideal candidate to take any force head on. Bringing up the rear is the mechanical king of Europe, the Tiger I. Very few enemy weapons will scratch a Tiger's surface, roll over your opponent with your nigh invulnerable task force.

This huge value starter set is just about to burst with all of this content, here's what you'll get:

This box set will allow you to field two armoured platoons, both with immense anti-tank capability. Every tank in this bundle has a super heavy anti-tank gun, which would make them one of the biggest threats on the battlefield - able to take out literally any tank fielded by your enemy!

This starter set gives you a force worth over 2000 points! So this is a great kit to pick up whether you're starting new or continuing your current collection.

With tough frontal armour, you can ensure that the Panther can go toe to toe with even the heaviest hitters of the war. It can also lead assaults as with a super heavy anti-tank gun, you can guarantee that there isn't a threat that the Panther can't deal with.
Cost:  284pts (inexperienced), 355pts (Regular), 426pts (Veteran).
Weapons:  1 turret-mounted super-heavy anti-tank gun with co-axial MMG and 1 forward-facing hull-mounted MMG.
Damage value:  9+ (medium tank).
Options:  May have additional pintle-mounted MMG for +15pts.
Special Rules:  Heavy Frontal Armour Tiger Fear

Field the tank that once struck fear into the heart of every Allied tank crewmen. The Tiger completely dominated the battlefields for a good period of time, and even after new technology and tanks started to make an appearance, the Tiger still managed to stay a massive threat to nearly all Allied units.
Cost:  395pts (Regular), 474pts (Veteran).
Weapons:  1 turret-mounted super-heavy anti-tank gun with co-axial MMG and 1 forward-facing hull-mounted MMG.
Damage value:  10+ (heavy tank).
Options:  May have additional pintle-mounted MMG for +15pts.
Special Rules:  Tiger Fear
Scale: 28mm / 1:56 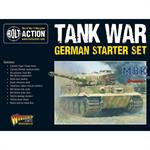