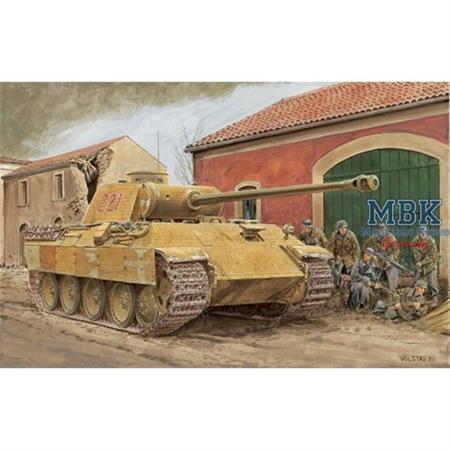 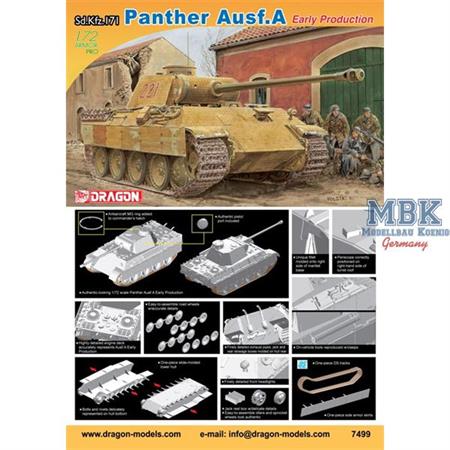 24.95 €
VAT included plus shipping and handling
Unfortunately sold out at the moment
No new delivery date known, if necessary please activate stock alert
To the Notepad
Question regarding the Article
Plastic Model Kit for a Panther


While it’s the impressive Tiger tank that usually attracts the most awe, it was the Sd.Kfz.171 Panther that in the long run was a more important tank to Germany during WWII. This 45-tonne medium tank represented a good balance of well-sloped armor protection, lethal firepower and able cross-country mobility, the design being inspired by the highly successful Russian T-34. The second main production variant of the Panther – the Ausf.A – appeared in August 1943, and its manufacture continued up till mid-1944 before being superseded by the ultimate Ausf.G. Some 2,192 Ausf.A Panthers were produced.

Dragon has previously produced 1/72 scale kits of early and late variants of the preceding Panther Ausf.D, and new to the range is this Panther Ausf.A Early-Production tank. Chronologically it follows on from the previous releases, giving modelers a new Panther variant to build. The turret is correctly suited to an Early-Production vehicle, possessing a periscope on the right side of the turret roof, plus a requisite fillet molded onto the side of the mantlet base. The upper hull is made as a single piece thanks to the clever use of slide molds. The lower hull tub has been formed the same way, thus ensuring a stable foundation for the rest of the build. All the appropriate characteristics of this Ausf.A Early-Production variant are present, and convenient DS tracks are provided too. Dragon’s delightful 1/72 scale Panther A definitely receives an ‘A’ grade!
Customer Reviews 7
Log in and write a Review
1 Reviews 5 Reviews 1 Reviews 0 Reviews 0 Reviews 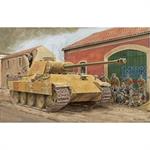