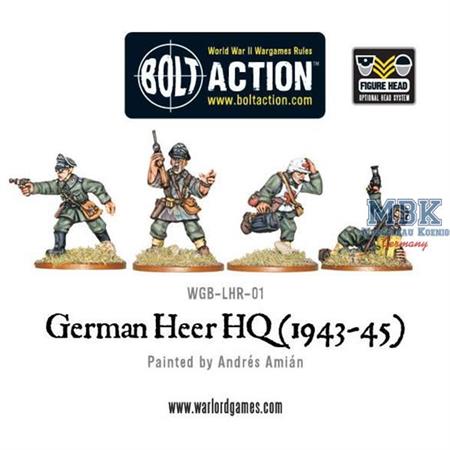 2
Item Number:
BA-WGB-LHR-01 (227)
Manufacturer
Bolt Action
Scale:
1:56
5.95 €
VAT included plus shipping and handling
Unfortunately sold out at the moment
No new delivery date known, if necessary please activate stock alert
To the Notepad
Question regarding the Article
German officers were capable and often experienced leaders. Junior officers were trained to undertake the role own immediate superiors, enabling them to use their intuition to take control of situations when necessary.

An officer unit consists of the man himself and can include up to 2 other men acting as his immediate attendants. Because of the high quality of the majority of German officers, the Bolt Action rules rate them as regular or veteran.

This splendid pack has four crucial men to make your squads perform.There are two Officers , a Captain and a Lieutenant, but either can be painted with the two models, the pack includes:

• A classic German Officer, leaning forward with a pistol outstretched

• A tough looking officer, in combat smock and tooled up with the fearsome Broom handle Mauser automatic and wooden stock.

• A radio operator/forward observer who is lying down in cover whilst firing a signal flare from his Verey pistol, perhaps calling down a barrage or directing incoming Stukas...

• The brave medic, with his red cross tabard and clutching his helmet to his head and his bag of tools, running to give help to the wounded that litter the battlefield. 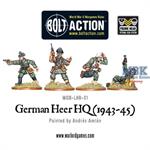