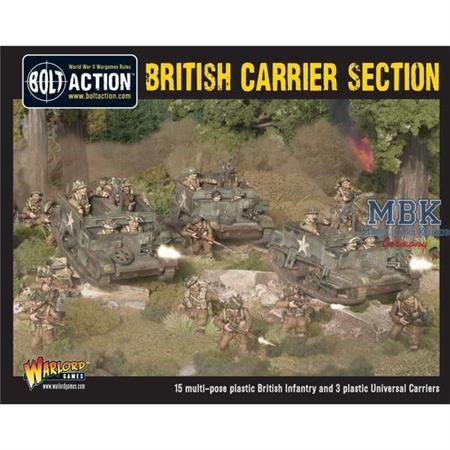 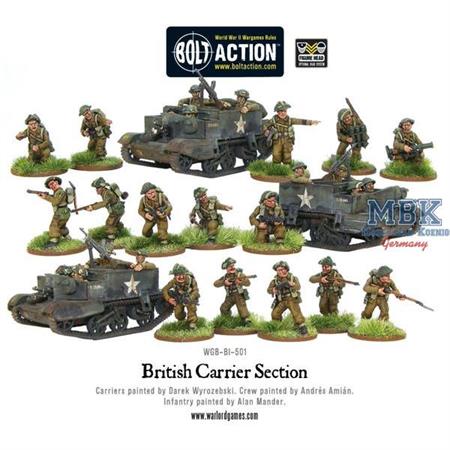 Log in and write a Review
Item Number:
BA-402011012
Manufacturer
Bolt Action
Scale:
1:56
47.95 €
VAT included plus shipping and handling
Unfortunately sold out at the moment
No new delivery date known, if necessary please activate stock alert
To the Notepad
Question regarding the Article

One of the enduring images of the British (and other forces of His Majesty's Commonwealth) are the brave lads being carried hell for leather in their Universal Carriers.

The Bren (or more accurately universal) carrier is possibly unique in all the armies of WW2. A small light weight armoured troop transport capable of carrying up to 6 men, it was used on every front the Commonwealth armies fought on €“ and even by the Russians via lease-lend and the Germans via captured examples! Their primary role was not recce as many think but simply as a transport to get troops right up to the fighting and, if needs be, to fight from the carrier itself. Other roles included weapon carrier (mortar and Vickers medium machine gun) and towing AT guns as well as artillery observation vehicles.

Every Commonwealth infantry battalion had a carrier platoon of 4 sections of 3 carriers each. The motor battalions of the Armoured divisions used them in platoons of 3 sections. In both cases 2 carriers formed the HQ component. In addition every infantry company had a carrier at HQ simply as the CO's runabout! Even the Parachute battalions had two each carried by glider! In short carriers were everywhere!

The plastic carrier kit allows you to chose whether to build it as a Mk I or Mk II version as it contains parts for both! 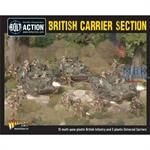