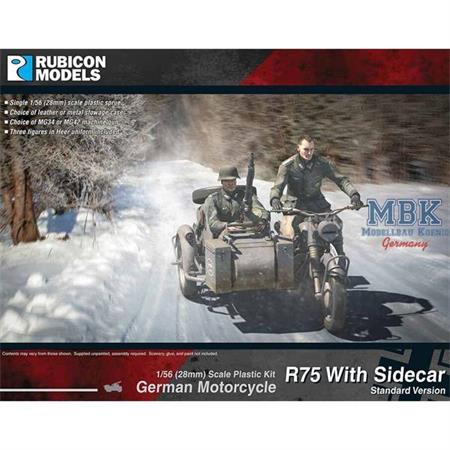 Log in and write a Review
Item Number:
RM280051
Manufacturer
Rubicon Models
Scale:
1:56
15.50 €
VAT included plus shipping and handling
Unfortunately sold out at the moment
No new delivery date known, if necessary please activate stock alert
To the Notepad
Question regarding the Article
In the 1930s, BMW were producing a number of popular and highly effective motorcycles.  In 1938 development of the R75 started in response to a request from the German Army.  Preproduction models of the R75 were powered by a 750cc side valve engine, which was based on the R71 engine.  However it was quickly found necessary to design an all-new OHV 750cc engine for the R75 unit.  This OHV engine later proved to be the basis for subsequent post-war twin BMW engines like the R51/3, R67 and R68.

The third side-car wheel was driven with an axle connected to the rear wheel of the motorcycle.  These were fitted with a locking differential and selectable road and off-road gear ratios through which all four and reverse gears worked.  This made the R75 highly maneuverable and capable of negotiating most surfaces.  A few other motorcycle manufactures, like FN and Norton, provided an optional drive to sidecars.

The BMW R75 and its rival the Zündapp KS750 were both widely used by the Wehrmacht in Russia and North Africa, though after a period of evaluation it became clear that the Zündapp was the superior machine.  In August 1942, Zündapp and BMW, on the urging of the Army, agreed upon standardization of parts for both machines, with a view of eventually creating a Zündapp-BMW hybrid (designated the BW43), in which a BMW 286/1 side-car would be grafted onto a Zündapp KS750 motorcycle.  They also agreed that the manufacture of the R75 would cease once production reached 20,200 units, and after that point BMW and Zündapp would only produce the Zündapp-BMW machine, manufacturing 20,000 each year.  Only 16,510 were produce before the war ended.

Since the target of 20,200 BMW R75’s was not reached, it remained in production until the Eisenach factory was so badly damaged by Allied bombing that production ceased in 1944.  A further 98 units were assembled by the Soviets in 1946 as reparations. 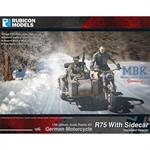